Welcome to the AberdeenBikers Forum 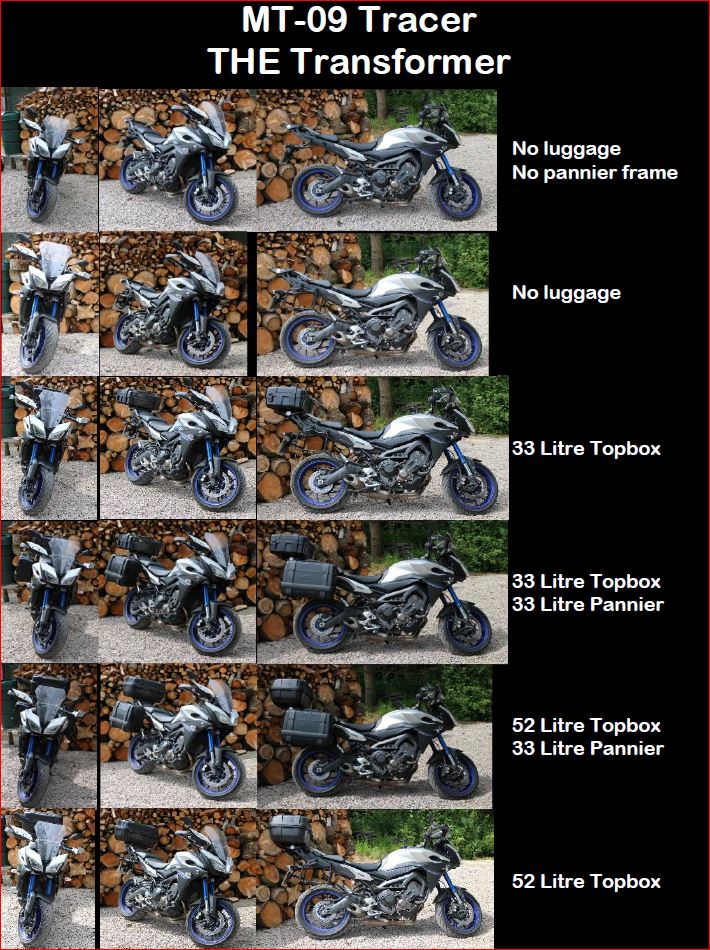 As you may notice the Tracer is now a very sensible bike, nothing silly about it at all

I have now done a few miles with pillions
Plenty of usable power to get up to a decent speed in an appropriate time.
Suspension and handling were good.
Nothing to fault.

I have no real change to my previous comments, except giving the bike some more credit for being a good bike.
It does not give me the big grin factor, but it is smooth and can do a number of jobs, carry people, carry stuff, has a decent turn of acceleration and speed.

Today I did a few miles on a Honda Africa Twin.
That make me smile.
I thought the Africa Twin engine and bike had character.
If you are accustomed to a sports bike you may think the Africa Twin has a lumpy engine, rubbish suspension and next to no brakes, but I say it is a joy to ride it gave me great pleasure and is full of character.

Riding the MT-09 from the service had me thinking what "character" is...take the engine, the MT-09 is not as smooth as most four cylinder engines, but it is smoother that most twins.
Often most four cylinder engines have a rev range or two that is "buzzy".
Often twins are referred to as thumpers, but not as thumpy as singles.
The triple...well believe it or not, it sits between the twins and four pots, neither buzzy or thumpy

Does the MT-09 lack character, for me yes, but not in a bad way, it feels efficient and is capable.
Top

I sat on a Tracer last week at Eccosse - couldn't even put both tip toes down! lovely bike though. MT-09 Standard was better for me and the MT-07 was just the right size :D
Top

Seat was probably in the high position.

Probably, I was a good few inches from being able to put my other foot down :D
Top

My seat is in the highest position, but the Tracer felt small compared with the Honda Africa Twin

I'm a bit of a short arse so I'm sure that didn't help I can't believe it's not butter!
Top

Shows how often I peruse this section,
I've had my Tracer since March and now done about 4000 miles and so far I have been very impressed.
Got it in place of the old Translap because I do like Triples and this one ticks all the boxes that a typical Triple does.
Some people on the MT09 Tracer forum complain about the seat but having been across to the West Coast for a few days with SWMBO on the back (in shizzle weather !) and fully loaded with top box and Yamaha Panniers and its one of the few bikes I've ridden in my 46 year biking career that doesn't need a replacement seat (IMO) and even the missus said the same so no need to Tony Archer to get involved ! If she thought it was bad, I'd have know about it !!
I have changed the screen to a smaller one, rather have the wind on my chest than the buffeting but thats a personal choice.
Now its dark, I have just found out that the lights are probably some of the best I've used from stock although this is the first LED one I've owned so they may all be like that, I had fitted Givi Engine Bars with the intention of fitting spots, but pretty sure the spots aren't needed.
As we all like to customise our bikes, I have done the same. Have to admit wasn't keen on the matt silver finish so recently got it totally repainted by Bike Pains (Cupar, excellent job they did by the way!) Yamaha Race Blue Metalflake, basically to match the wheel and forks and its nice and shiny now !
Also best thing was the Ixil exhaust system i got cheaper off the MT09 Forum and sounds loverly even with the baffles in.
Also got carbon front mudguard, rear hugger/chain guard, Engine Bars, Givi Rack, Chinese Levers! and stainless bolt kit and at the moment I don't think it needs anything else.
I love riding this bike, I tend to stick to the chlamydia mode coz A is a bit snatchy and like Dave says, the right wrist knows how to handle rain but I may change my mind if it gets a bit frosty!
The riding position for me (6-1) is perfect and I can ride full to empty tanks with no aches or pains.
So far I have found the rear shock ok-ish and I know Neil does replacements with Nitrons but I don't feel the need to spend too much dosh at the moment and that also goes for the ECU Flash which I also believe can improve the response but again they are not essentials. Only comment I have about the rear shock is its a pin to adjust because the C Spanner fouls the frame as you try to adjust. I also got a set of stronger clutch springs as it is something the Tracer is known for (apparently) and I did experience a little bit of clutch slip when fully loaded with pillion and luggage.
Another thing I have found recently, since the salt has appeared, is the finish on some of the metal bits with a slight bit of white corrosion and the brake discs looking a bit broon. Since then I have dosed it in ACF50 and FS365 (obviously not the brakes!) so I'll keep an eye on proceedings.
This is my first Yamaha after most years on Hondas so will see how it goes over the winter.
You do not have the required permissions to view the files attached to this post.
Top

The head lights are great

That is my Tracer just past the 10k miles mark.

Now switching off the traction control at every start up, makes my driveway so much easier, and maybe feels better on the road.